Rushanara Ali MP’s speech on the Prevention of Genocide Amendment

On 19 January the Lords Amendments to the Trade Bill will be voted on in the house. The Labour party and Rushanara Ali MP will be supporting the human rights and genocide amendments.

The bill was debated on 13 January, but this amendment was rejected by the Government. Although Rushanara was on the list to speak in the chamber, unfortunately, she wasn’t called due to shortage of time. This is her speech in support of the amendment. 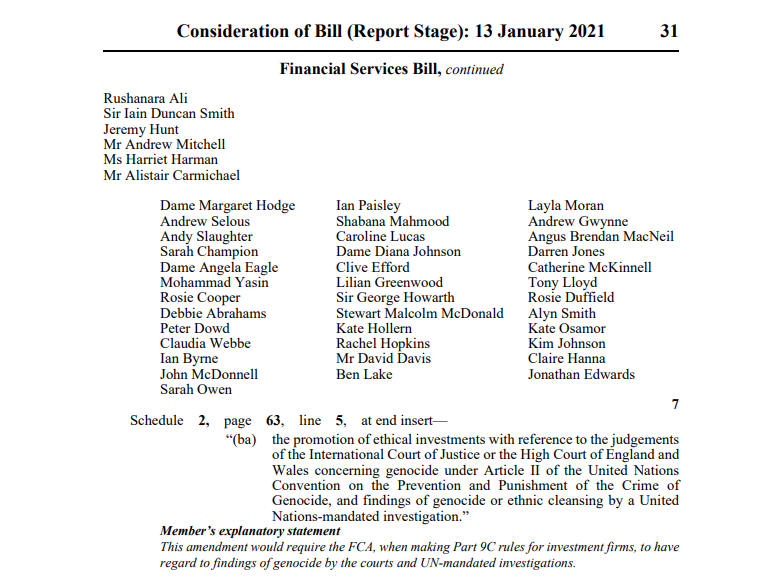 The financial services sector is the backbone of our economy, contributing over 132 million pounds and employing millions of people. This is why it is vital that our government ensures that in a post-Brexit world, this sector thrives, can be resilient and crucially that it acts responsibly and ethically. We must have confidence that our financial services are not engaged in supporting regimes or companies that are responsible for ethnic cleansing, crimes against humanity and genocide.

The Minister in this opening remarks said he was sympathetic to the issues raised by our amendment which would require; the promotion of ethnical investments with reference to the judgements of the International Court of Justice or the High Court of England and Wales concerning genocide under Article II of the United Nations Convention on the Prevention and Punishment of the Crime of Genocide, and findings of genocide or ethnic cleansing by a United Nations-mandated investigation.

So this amendment would only require the Financial Conduct Authority, when making Part 9C rules for investment firms, to have regard to findings of genocide by the courts and UN-mandated investigations.

Therefore, the Minister’s assertion that the amendment would require the FCA to make political choices about whether to associate itself and its rules with countries that are guilty of genocide or ethnic cleansing, is not the case. The FCA would in fact be implementing legal judgments and findings from UN-mandated investigation. Furthermore, the Environmental, Social and Governance (ESG) requirement within which this should fall is a matter for the FCA. It is deeply concerning to suggest that regulators don’t have a role in stopping investments in unethical practices especially in relation to firms linked to genocide and ethnic cleansing.

The proposed amendment would have required the Financial Conduct Authority, when setting investment rules, to take account of companies’ involvement in genocide. It aimed to bar UK investment in firms complicit in genocide and ethnic cleansing and to nurture an environment of open, transparent, ethical investment. The Amendment is about the UK’s financial services industry taking a lead on ethical and responsible investment.

Year after year we have debated the repression of the Rohingya people, the Uyghur people and all others who have suffered genocide and ethnic cleansing around the world. And all too often we end our debates with a feeling of powerlessness. That we are mere bystanders to evil.

One Million Uyghur people have been placed in internment camps, a million Rohingya people have been forced into refuge from Myanmar to Bangladesh. This amendment gave us the chance to do something real, practical, and effective. It hits the perpetrators of genocide, and crimes against humanity, where it hurts – in the wallet.

On 27 January, we mark Holocaust Memorial Day, when we remember the Holocaust, and the genocides in Cambodia, Rwanda, Bosnia and Darfur, and more recent events in Myanmar and the Chinese province of Xinjiang, and elsewhere.

This year’s theme is ‘Be the Light in the Darkness’. It is right that we not only remember, but also learn from the Holocaust and subsequent cases of genocide, throughout the twentieth and into the twenty-first centuries. None of these atrocities took place in a vacuum. They required a well-funded military machine and exploited weaknesses in international law and leadership. Crucially, many of these crimes against humanity were supported by financial institutions, corporations, and companies, complicit in acts of murder, rape and violence.

Thanks to the scholarship of institutes such as Yad Vashem and the testimony of witnesses, we understand the significant role of businesses in the Holocaust. A number of firms, many household names, have accepted culpability and paid compensation. For example, in 1999 the BBC reported that twelve leading firms were paying compensation including:-

The BBC also reported that Barclays would pay compensation to French Jewish families whose assets they seized in 1941. In 2000, the Independent reported that Nestle was paying 25 million Swiss Francs to survivors and Jewish organisations after it was shown the firm used slave labour. The list goes on and on. According to many scholars and researchers, the list of firms who profited from the Holocaust, either by the use of forced labour or through lucrative contracts is alarmingly long.

I am not directly comparing the Holocaust, which stands as a unique event in human history, to any subsequent event, but if we look today at the murder and displacement of the Rohingya people in Myanmar or the repression of the Uyghurs in Xinjiang, we see similar patterns – companies investing in regimes responsible for terrible crimes, turning a blind eye to turn a fast profit.

As Rabbi Moshe Freeman wrote in the Jewish Chronicle in July last year, ‘If we remain silent in the face of the flagrant abuse and persecution against Uighur Muslims, we will be repeating the mistakes of history.’

In September 2018, the United Nations Fact-Finding Mission on Myanmar called for the investigation and prosecution of Myanmar’s Military leaders for genocide, crimes against humanity and war crimes.

The report said: “The actions of the Tatmadaw (Myanmar military) in Kachin, Rakhine and Shan States, in particular in the context of the ‘clearance operations’ in northern Rakhine State in 2016 and 2017, have so seriously violated international law that any engagement in any form with the Tatmadaw, its current leadership, and its businesses, is indefensible.”

The Burma Campaign UK has published its so-called ‘Dirty List’ of over 80 firms doing business with the military regime in Myanmar. Firms supplying military equipment, surveillance technology, construction and engineering expertise and a range of other goods and services.

We should also consider social media companies such as Facebook. Facebook has admitted its own role in stirring up hatred against the Rohingya. The firm commissioned a report in 2018, which according to the BBC showed Facebook had incited ‘offline violence.’ In 2018 Marzuki Darusman, chairman of the UN Fact-Finding Mission on Myanmar, told reporters at Reuters that social media had played a “determining role” in Myanmar.

Complicity doesn’t have to be direct – it can be indirect through investment funds. According to Reuters, so-called Exchange Traded Funds allow pension fund managers to invest in firms, even when they are known to be complicit in human rights violations in western China, for example.

Over 80 well-known global brands have supply chains connected to forced slave labour in Uyghur factories. The Daily Telegraph showed that these same factories are suspected of using forced labour to produce PPE and ventilators for our NHS during the Covid pandemic.

It’s been widely reported in the British Media in outlets such as The Telegraph and The Guardian that there are technology firms, like Hikvision, selling facial recognition software used to racially profile the Uyghurs. Hikvision is present on the major investment indices, despite supplying surveillance equipment to the so-called re-education camps, which are in face internment camps where one million Uyghurs are held.

Even a household name like Disney has rightly come under criticism. The Guardian reported that Disney recently filmed their new remake of Mulan in the Xinjiang Region, in close proximity to the human rights abuses taking place in the Uyghur detention camps. They then publicly thanked eight government bodies in Xinjiang.

This amendment would have ensured that when the Financial Conduct Authority sets its rules for institutional investors with proper regard for the complicity of their clients in genocide or ethnic cleansing. We know that ethical business is good business. That ethics and profits can go hand in hand. This amendment would have had a major impact on investors’ behaviour, it would have generated greater citizen scrutiny, and would have choked off the funding to despots and murderers.

This would have been the start of a process that ends with no firm profiting from genocide or ethnic cleansing, and an environment where firms must be transparent and ethical. This amendment would have given us a powerful tool to choke the investment and support for regimes which oppress and murder their people. It would have sent a clear signal that when we say never again we mean it.